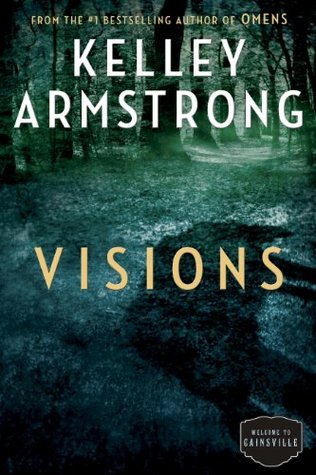 In the second book in bestselling author Kelley Armstrong’s exciting new Cainsville series, Olivia’s newly discovered power to read omens leads to the discovery of a gruesome crime with troubling connections to her hometown.

Omens, the first installment in Kelley Armstrong’s Cainsville series, introduced Olivia Taylor-Jones, daughter of notorious serial killers, and Gabriel Walsh, the self-serving, morally ambiguous lawyer who became her unlikely ally. Together, they chased down a devious killer and partially cleared her parents of their horrifying crimes.

Their success, however, is short lived. While Olivia takes refuge in the old, secluded town of Cainsville, Gabriel’s past mistakes come to light, creating a rift between them just when she needs his help the most.

Olivia finds a dead woman in her car, dressed to look like her, but the body vanishes before anyone else sees it. Olivia’s certain it’s another omen, a sign of impending danger.

But then she learns that a troubled young woman with a connection to Cainsville went missing just days earlier–the same woman Olivia found dead in her car. Someone has gone to great lengths to kill and leave this young woman as a warning. But why? And what role has Olivia’s new home played in this disturbing murder?

Olivia’s effort to uncover the truth places her in the crosshairs of old and powerful forces, forces that have their own agenda, and closely guarded secrets they don’t want revealed.

This, for some reason, I have only read twice, but I don’t know why? Apparently I was being silly. Because this book deserves many re-reads, and in fact, I hate past-me’s original review of this book. Because seriously? I missed out on a lot.

I love that this book basically immediately follows Omens, meaning if you read them back to back, like I am doing right now, you get a seamless, day to day reading experience of Olivia’s life. And that.is.awesome!

Pamela as a mother is lacking, and it’s never more apparent than in this book. I absolutely, positively do not trust her but that might be after-thought as I have read the later books in this series…Spoiler alert…for myself?

Olivia and Gabriel are closer now, even if Gabriel himself would refuse to admit it (I’d think). But actions speak louder than words. And Gabriel’s actions reveal that he is starting to like her, or at the very least is used to her slotting into her routine.

Ricky is gorgeous. He even sounds gorgeous on the page. He seems like he could be a literary underwear model, but he has a brain in his head, which I appreciate. He isn’t just a side-piece, and Olivia isn’t just his. He’s well-rounded, respectful, and just generally awesome.

Kelley Armstrong does what he does best, weaving a bit of the preternatural into the plot, and then hitting us with the big moment at the end.

You’ll like this book if you like mystery, suspense, or fantasy. Or all of it at once. Just trust me.