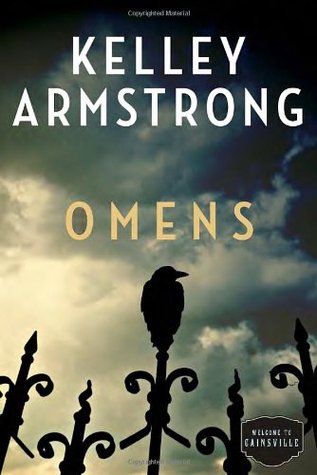 Genre: Defies all genre but it’s fantasy, horror, suspense and mystery all rolled into one if you’re going to force me to label it.

Twenty-four-year-old Olivia Taylor Jones has the perfect life. The only daughter of a wealthy, prominent Chicago family, she has an Ivy League education, pursues volunteerism and philanthropy, and is engaged to a handsome young tech firm CEO with political ambitions.

But Olivia’s world is shattered when she learns that she’s adopted. Her real parents? Todd and Pamela Larsen, notorious serial killers serving a life sentence. When the news brings a maelstrom of unwanted publicity to her adopted family and fiancé, Olivia decides to find out the truth about the Larsens.

Olivia ends up in the small town of Cainsville, Illinois, an old and cloistered community that takes a particular interest in both Olivia and her efforts to uncover her birth parents’ past.

Aided by her mother’s former lawyer, Gabriel Walsh, Olivia focuses on the Larsens’ last crime, the one her birth mother swears will prove their innocence. But as she and Gabriel start investigating the case, Olivia finds herself drawing on abilities that have remained hidden since her childhood, gifts that make her both a valuable addition to Cainsville and deeply vulnerable to unknown enemies. Because there are darker secrets behind her new home and powers lurking in the shadows that have their own plans for her.

I do not even remember how many copies of this book I have bought and given out for Christmas/birthdays/office leaving gifts. I’ve lost count of how many copies I’ve bought for myself because I’ve lent them out to friends.

You might think I’m joking but I’m not. She is the one writer I consistently turn to when I want a story that is enduring, well written and full of characters that are life-like.

This might be my favourite KA series. I’m not sure. Rockton is sneaking up there and Otherworld will always have a place in my heart.

This book is mysterious, intriguing and pulls you in so deep, enriching your imagination and ensnaring your thoughts. It is one that doesn’t leave you immediately and keeps bringing you back to think about again and again, every nuance that you missed, or didn’t quite get at first leaving you wanting to re-read it.

The premise of this book seems so simple, but it is anything but. Olivia finds out her real parents are serial killers. Who hasn’t that happened to? Honestly. But instead of stepping down out of fear, she faces the revelation with quite a bit of backbone and grit. This is something I admire in a person, and in fictional characters.

Gabriel is full of secrets himself, and cold, or so it seems. But he’s not really. He’s got depth, and an iron will. He is one of my favourite characters in Kelley Armstrong’s novels.

The heart of this novel is the knowledge that maybe no matter our ages some of us don’t really know who we are, even if we do know our parents. Sometimes we have to explore ourselves, and our truths to figure it out. That is what Olivia does in this, and her discoveries are abnormal, but intriguing and out of this world.