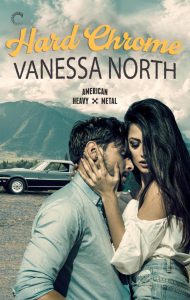 Hard Chrome deals with subjects some readers may find difficult, including domestic violence, animal cruelty, drug use, and teen pregnancy. 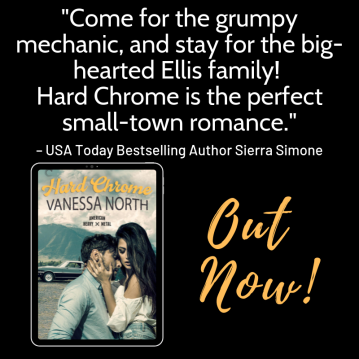 behind the grease stains and the polished chrome until it was too late. Now she’s back, determined to save her father’s legacy—and bring the South’s premier classic-car shop into the new century. Nothing is going to stop her—especially not the sexy tech who refuses to follow her lead.

American Heavy Metal is the only home Duke Wilson’s ever known, and no high-heeled, sharp-tongued princess is going to take it away. He tolerates Tanner’s advice, and it’s fun to push her buttons, but she doesn’t belong in the shop—never has, never will. The sooner she realizes that the sooner he can find his new normal.
When Tanner falters, revealing the pain beneath her bravado, Duke comforts her the only way he knows how. And when violence from his past threatens their future, she’ll be there for him, offering him the one thing he’s always wanted—a shot at a real family. He just has to convince himself to take it.

Vanessa North is a romance novelist, a short fiction geek, and a knitter of strange and wonderful things. Her works have been shortlisted for both the Lambda Literary Award and the RITA© Award, and have garnered praise from The New York Times, The Washington Post, and Publisher’s Weekly. She lives in Northwest Georgia with her family: a Viking, twin boy-children, and two large dogs.

All buy links or pre-order links:

Giveaway: Vanessa North is celebrating the release of HARD CHROME with a big giveaway! Three prizes are up for grabs: (2) $10 Amazon Gift Cards and (1) Signed Paperback of Hard Chrome + some serious auto-shop inspired swag!

Since I never met trouble I couldn’t land in face first, I stand and follow Tanner out to the kitchen.

She’s leaning over the sink, her eyes closed, breathing slow like she’s in a yoga class. Elbows locked, knuckles white. I get the feeling if she let go of that countertop, she’d crumple to the ground.

She nods, not opening those pretty eyes for a long moment; then she turns and she stares right at me. “Do you know what it’s like to have everyone counting on you? And you know you’re going to let them down, but you can’t say no, so you just let it happen?”

And I’m twenty, when they finally lock him up for fighting dogs.

And I’m tired and relieved when he gets time added to his sentence for punching a guard, because it means I don’t have to stand up there again and watch my mother’s heart break when all I ever wanted was my family to be safe.

And still he got paroled.

Can she? I don’t know. Tom Ellis didn’t raise no fools. Maybe she’s looking for an out, any excuse to cut and run, and she just needs someone who isn’t her family to give it to her.

“I don’t think you want to. I don’t think you love the cars, or the work, or this town.” I swallow, hard. “Families are fucked up, all of ’em. I get why you want to stay. I just don’t get what hurting yourself and them to prove something does for anyone.”

She scowls then turns back to the sink and her yoga breathing. My fingers itch to touch her, to comfort her somehow, but I can take a hint. Besides. I don’t even like her.