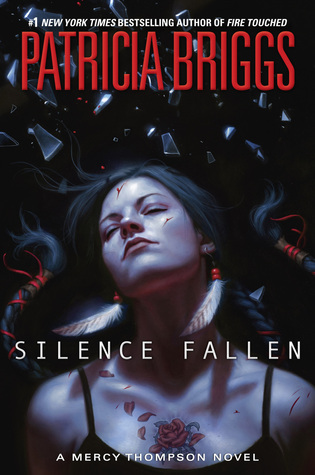 Attacked and abducted in her home territory, Mercy finds herself in the clutches of the most powerful vampire in the world, taken as a weapon to use against alpha werewolf Adam and the ruler of the Tri-Cities vampires. In coyote form, Mercy escapes only to find herself without money, without clothing, and alone in the heart of Europe…

Unable to contact Adam and the rest of the pack, Mercy has allies to find and enemies to fight, and she needs to figure out which is which. Ancient powers stir, and Mercy must be her agile best to avoid causing a war between vampires and werewolves, and between werewolves and werewolves. And in the heart of the ancient city of Prague, old ghosts rise…

So it is entirely possible I will never get sick of this series and it might end up being one of those that I read again and again for my own continuous enjoyment while not caring what other people think about the covers while I’m out in public.

Now after that run-on sentence I hope you’ll all forgive me. I have not been in a reading mood. Or a…adulting mood. Or anything.

I am hoping that this is the book that changes that, even though it took me months to finish because I was in a slump.

But here I am, reading and writing and enjoying life for the moment.

Enjoying this book. So good. I wish I could explain to you my feelings, but I can’t. Maybe that’s why I’m as of yet unpublished. (One of the many, many reasons)

I digress. A lot.

This was written in a much different way than Patricia Briggs’ normal formula but once I got used to it, and the time jumping I wanted more.

I devoured it once I hit the sweet reading spot, curled up on my couch with my dog getting annoyed at me for shifting around.

But Adam, how I love Adam and getting his point of view and the fact that we learn a little more about how vampires work. God it was just so good and if she wants to write every book like this going forward I would be happy.

I never want this series to end. I want it to keep going and the characters to keep growing and the world to be expanded upon because it’s such a great series for taking you out of your head and putting you in a situation so fantastical it seems real and yet isn’t.

All in all this was a hit out of the park for me.