Review: The Absent One by Jussi Adler-Olsen 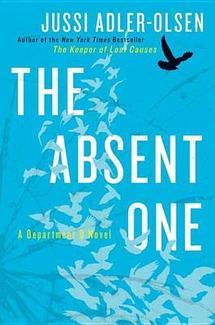 Title: The Absent One

Rating: Four freakouts out of five.

. The result wasn’t what Mørck—or readers—expected, but by the opening of Adler-Olsen’s shocking, fast-paced follow-up, Mørck is satisfied with the notion of picking up long-cold leads.

So he’s naturally intrigued when a closed case lands on his desk: A brother and sister were brutally murdered two decades earlier, and one of the suspects—part of a group of privileged boarding-school students—confessed and was convicted. B

ut once Mørck reopens the files, it becomes clear that all is not what it seems. Looking into the supposedly solved case leads him to Kimmie, a woman living on the streets, stealing to survive.

Kimmie has mastered evading the police, but now they aren’t the only ones looking for her. Because Kimmie has secrets that certain influential individuals would kill to keep buried . . . as well as one of her own that could turn everything on its head.

Let me start by saying I wanted to devour this book but it turned around and devoured me and I am a-ok with that.

Also let me apologize for my absence. Around Jul 2 I started having wicked bad vertigo and would randomly fall over, be unable to get up or just plain pass out. Whilst my doctor is not sure what it is exactly we are treating some of the symptoms.

Now back to our regularly scheduled oh my god.

This book is good. Can’t put it down but want to throw it away from you because damn it’s violent but it’s  just…so good. I know it seems weird to say that violence is good, but this was a really big freaking page turner for me.

Everything I loved from the last book exists in this, and somehow there is more of it. The grittiness of the mystery without it being too mysterious, and yes sometimes even the violence.

The main characters are awesome and the antagonists had me spitting, furiously mad. It was good. I have my hands on the next of the series now and a day off coming so wish me luck!