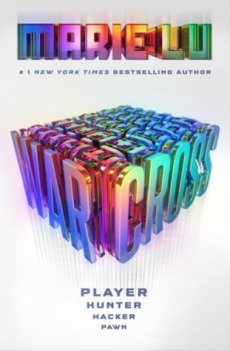 For the millions who log in every day, Warcross isn’t just a game—it’s a way of life. The obsession started ten years ago and its fan base now spans the globe, some eager to escape from reality and others hoping to make a profit. Struggling to make ends meet, teenage hacker Emika Chen works as a bounty hunter, tracking down players who bet on the game illegally. But the bounty hunting world is a competitive one, and survival has not been easy. Needing to make some quick cash, Emika takes a risk and hacks into the opening game of the international Warcross Championships—only to accidentally glitch herself into the action and become an overnight sensation.

Convinced she’s going to be arrested, Emika is shocked when instead she gets a call from the game’s creator, the elusive young billionaire Hideo Tanaka, with an irresistible offer. He needs a spy on the inside of this year’s tournament in order to uncover a security problem . . . and he wants Emika for the job. With no time to lose, Emika’s whisked off to Tokyo and thrust into a world of fame and fortune that she’s only dreamed of. But soon her investigation uncovers a sinister plot, with major consequences for the entire Warcross empire.

This book is like nothing I’ve ever read before, and I desperately want, but don’t want something like Warcross to exist in real life. It’s exciting, and intriguing but at the same time books like this have made me scared of computers and robots haha.

It is vibrantly described, and has a gritty, dark underbelly I appreciate, especially in a young adult novel. Warcross is an intriguing concept, and not so futuristic that it seems too hard to comprehend or picture.

Emika is a fun character, and extremely well written in my opinion, with stubbornness and determination in spades. She isn’t your normal YA protagonist which I appreciate, and she doesn’t let her judgment get clouded too much by her feelings.

Marie Lu has knocked it out of the park with this novel for me, giving me a series I can’t wait to read the next book in, and an ending that had me furrowing my brow and hugging the book wishing for more.

I wish I could explain how much I loved this book but I find that my words fail me. Just read it for yourself.