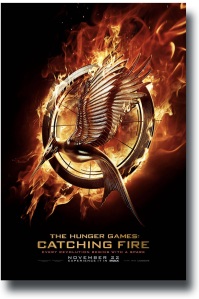 Two movie reviews in one day? It might be the start of something new here.

Unfortunately I didn’t get to see this movie in theatres, which is something I do regret because I feel like I missed out on a lot of experience by not doing so. I will however admit my reason for not doing so was that I didn’t really love the first movie.

This one however, was good on a much more eye catching, visceral level for me. The actors, Jennifer Lawrence and Josh Hutcherson especially were more into their roles it seemed. And the stakes seem so much higher.

There were parts of the movie that had me gasping for breath, when Liam Hemsworth’s Gale was whipped in the square I ached, and when the baboons attacked I marvelled at the wonder of how far CGI has come.

The stand out scene for me, was in District 11. The salute, the families of fallen tributes and Jennifer Lawrence screaming as Katniss and struggling against those who wish to take her away.

Elizabeth Bank, is, as she was in the first movie pitch perfect in her role as Effie, a catch in her throat as she thinks of losing her victors. And they are very much hers, dramatic and performing to the best of their abilities in a world gone wrong with promises broken.

Jennifer Lawrence is good as Katniss, often dramatic and reckless just as she is in the books and as she was in the first movie.

There are moments that seem a little over the top, and not in the best way, such as her scenes with Gale, but I am unsure if that was the acting or the writing.

In terms of what is missing from the book I have decided to take this as simply a film, apart from it’s source material because it is that well done. However once again there is some issues with the restrictions of how the descriptive brutality of the book would be on screen, and would effectively ruin the PG-13 rating which does soften the blow of what could be a truly horrific book.

All in all this movie is gorgeous, it is well acted and I can’t wait for the next one.